Click to get your copy of the Hockey-Kids, free delivery worldwide

My whole life has somehow been characterised and filled with my love for books.

No wonder then that I became an artisan bookbinder before I started not only to bind but also to write and illustrate books.

In between, I studied French (due to my French roots) and Arts and became, above all, a mum filling her children's bookshelves with plenty of books.

Until the day when I tried to put in one about my son's favourite hobby: Hockey... It didn't exist. So, I began to write a book series for boys and girls of primary school age… "The Hockey-Kids" were born.

That was in 2014 and marked the beginning of my reading tours through Germany's classrooms and hockey clubs. During the past five years, I have been able to reach hundreds of pupils in Germany, France and Switzerland, to infect them with my passion for hockey and to be involved in so many amazing tournaments, whether for kids or at the Indoor Hockey World Cups 2015 in Leipzig and 2018 in Berlin. Not to forget the book fairs in Germany.

2016, I took the decision to leave my publisher and to create my own little publishing company "MON COQ edition". That way, I kept all the rights on my work and was free to decide about my next steps. And I had loads of them in mind and in preparation...

From the outset, it increasingly became my heartfelt wish to introduce children to our great sport - Hockey - and give them reading material focusing on their sporting hobby. My books became a kind of tool for my own way of hockey development.

But I didn't want only young children in Germany to take the Hockey-Kids Lena, Max and Lars to their hearts. So, today, there are four translations of Book 1 of my children's book series "The Hockey-Kids". They have been published in English, French, Spanish and Dutch, all translated by professional translators.

Kids from all over the world are now able to read my books and to enjoy hockey! ... Well, that's what I thought first. But from the author & illustrator that I was, I turned into someone who takes all opportunities to meet hockey people, to learn about their needs... and to help.

Today, I'm very proud about my little idea that grew more and more in my heart: my own campaign called "Hockey-Kids 4 Hockey Sticks" - supported by the FIH's The Hockey Foundation as an official "Hockey 4 Life" project. That way I will from now on collect hockeysticks during my numerous reading tours to enable kids all over the world to play hockey. Find more information about my campaign here.

Enjoy my little world of The Hockey-Kids, find out more about my books and work and join me on the Socials.

Looking forward to connect with YOU, 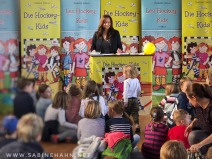 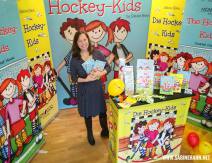